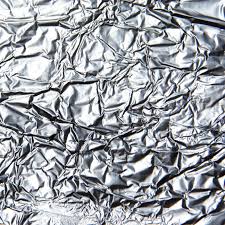 Aluminium (aluminum in American and Canadian English) is a chemical element with the symbol Al and atomic number 13. Aluminium has a density lower than those of other common metals, at approximately one third that of steel. It has a great affinity towards oxygen, and forms a protective layer of oxide on the surface when exposed to air. Aluminium visually resembles silver, both in its color and in its great ability to reflect light. It is soft, non-magnetic and ductile. It has one stable isotope, 27Al; this isotope is very common, making aluminium the twelfth most common element in the Universe. The radioactivity of 26Al is used in radiodating.

Chemically, aluminium is a weak metal in the boron group; as it is common for the group, aluminium forms compounds primarily in the +3 oxidation state. The aluminium cation Al3+ is small and highly charged; as such, it is polarizing, and bonds aluminium forms tend towards covalency. The strong affinity towards oxygen leads to aluminium’s common association with oxygen in nature in the form of oxides; for this reason, aluminium is found on Earth primarily in rocks in the crust, where it is the third most abundant element after oxygen and silicon, rather than in the mantle, and virtually never as the free metal.

The discovery of aluminium was announced in 1825 by Danish physicist Hans Christian Ørsted. The first industrial production of aluminium was initiated by French chemist Henri Étienne Sainte-Claire Deville in 1856. Aluminium became much more available to the public with the Hall–Héroult process developed independently by French engineer Paul Héroult and American engineer Charles Martin Hall in 1886, and the mass production of aluminium led to its extensive use in industry and everyday life. In World Wars I and II, aluminium was a crucial strategic resource for aviation. In 1954, aluminium became the most produced non-ferrous metal, surpassing copper. In the 21st century, most aluminium was consumed in transportation, engineering, construction, and packaging in the United States, Western Europe, and Japan.

Despite its prevalence in the environment, no living organism is known to use aluminium salts metabolically, but aluminium is well tolerated by plants and animals. Because of the abundance of these salts, the potential for a biological role for them is of continuing interest, and studies continue.

Lithium (from Greek: Î»Î¯Î¸Î¿Ï, romanized: lithos, lit. ‘stone’) is a chemical element with the symbol Li and atomic number 3. It is a soft, silvery-white alkali metal. Under standard conditions, it is the lightest metal and the lightest solid element. Like all alkali metals, lithium is highly reactive and flammable, and must be stored in mineral oil. When cut, it shows a metallic shine, but moist air rusts/wears away it quickly to a dull silvery gray, then black discolor and ruin. It never happens freely in nature, but only in (usually ionic) compounds, such as pegmatitic minerals, which were once the main source of lithium. Due to its dissolvability as an ion, it is present in ocean water and is commonly found in salt waters. Lithium metal is isolated electrolytically from a mixture of lithium chloride and potassium chloride.

The nucleus of the lithium atom edges on are borderline instable, since the two stable lithium isotopes found in nature have among the lowest binding energies per nucleon of all stable nuclides. Because of its relative nuclear instability, lithium is less common in the solar system than 25 of the first 32 chemical elements even though its nucleus is very light: it is an exception to the rule that heavier cell nuclei are less common. For related reasons, lithium has important uses in nuclear physics. The change of lithium atoms to helium in 1932 was the first fully man-made nuclear reaction, and lithium deuteride serves as a fusion fuel in staged thermonucleur weapons.

Lithium is present in organic systems in trace amounts; its functions are uncertain. Lithium salts have proven to be useful as a mood-stabilizing drug in the treatment of bi-polar disorders.

Sodium is a chemical element with the symbol Na (from Latin “natrium”) and atomic number 11. It is a soft, silvery-white, highly reactive metal. Sodium is an alkali metal, being in group 1 of the periodic table. Its only stable isotope is 23Na. The free metal does not happen in nature, and must be prepared from compounds. Sodium is the sixth most plentiful element in the Earth’s crust and exists in many minerals such as feldspars, sodalite, and rock salt (NaCl). Many salts of sodium are highly water-soluble: sodium ions have been slowly leaked by the action of water from the Earth’s minerals over very long periods of time, and so sodium and chlorine are the most common dissolved elements by weight in the oceans.

Sodium was first isolated by Humphry Davy in 1807 by the electrolysis of sodium hydroxide. Among many other useful sodium compounds, sodium hydroxide (lye) is used in soap manufacture, and sodium chloride (edible salt) is a de-icing agent and a nutrient for animals including humans.

By means of the sodium-potassium pump, living human cells pump three sodium ions out of the cell in exchange for two potassium ions pumped in; comparing ion concentrations across the cell membrane, inside to outside, potassium measures about 40:1, and sodium, about 1:10. In nerve cells, the electrical charge across the cell membrane enables transmission of the nerve sudden (unplanned) desire–an action potential–when the charge is disappeared (or wasted); sodium plays an extremely important role in that activity.