Lutetium is a chemical element with the symbol Lu and atomic number 71. It is a silvery white metal, which resists corrosion in dry air, but not in moist air. Lutetium is the last element in the lanthanide series, and it is traditionally counted among the rare earths. Lutetium is generally considered the first element of the 6th-period transition metals by those who study the matter, although there has been some dispute on this point.

Lutetium was independently discovered in 1907 by French scientist Georges Urbain, Austrian mineralogist Baron Carl Auer von Welsbach, and American chemist Charles James. All of these researchers found lutetium as an impurity in the mineral ytterbia, which was previously thought to consist entirely of ytterbium. The dispute on the priority of the discovery occurred shortly after, with Urbain and Welsbach accusing each other of publishing results influenced by the published research of the other; the naming honor went to Urbain, as he had published his results earlier. He chose the name lutecium for the new element, but in 1949 the spelling was changed to lutetium. In 1909, the priority was finally granted to Urbain and his names were adopted as official ones; however, the name cassiopeium (or later cassiopium) for element 71 proposed by Welsbach was used by many German scientists until the 1950s.

Lutetium is not a particularly abundant element, although it is significantly more common than silver in the earth’s crust. It has few specific uses. Lutetium-176 is a relatively abundant (2.5%) radioactive isotope with a half-life of about 38 billion years, used to determine the age of minerals and meteorites. Lutetium usually occurs in association with the element yttrium and is sometimes used in metal alloys and as a catalyst in various chemical reactions. 177Lu-DOTA-TATE is used for radionuclide therapy (see Nuclear medicine) on neuroendocrine tumours. Lutetium has the highest Brinell hardness of any lanthanide, at 890–1300 MPa.

Because of production difficulty and high price, lutetium has very few commercial uses, especially since it is rarer than most of the other lanthanides but is chemically not very different. However, stable lutetium can be used as catalysts in petroleum cracking in refineries and can also be used in alkylation, hydrogenation, and polymerization applications.

Lutetium aluminium garnet (Al5Lu3O12) has been proposed for use as a lens material in high refractive index immersion lithography. Additionally, a tiny amount of lutetium is added as a dopant to gadolinium gallium garnet, which is used in magnetic bubble memory devices. Cerium-doped lutetium oxyorthosilicate is currently the preferred compound for detectors in positron emission tomography (PET). Lutetium aluminium garnet (LuAG) is used as a phosphor in light-emitting diode light bulbs.

Aside from stable lutetium, its radioactive isotopes have several specific uses. The suitable half-life and decay mode made lutetium-176 used as a pure beta emitter, using lutetium which has been exposed to neutron activation, and in lutetium–hafnium dating to date meteorites.  The synthetic isotope lutetium-177 bound to octreotate (a somatostatin analogue), is used experimentally in targeted radionuclide therapy for neuroendocrine tumors. Indeed, lutetium-177 is seeing increased usage as a radionuclide in neuroendrocine tumor therapy and bone pain palliation. Research indicates that lutetium-ion atomic clocks could provide greater accuracy than any existing atomic clock.

Lutetium tantalate (LuTaO4) is the densest known stable white material (density 9.81 g/cm3) and therefore is an ideal host for X-ray phosphors. The only denser white material is thorium dioxide, with density of 10 g/cm3, but the thorium it contains is radioactive. 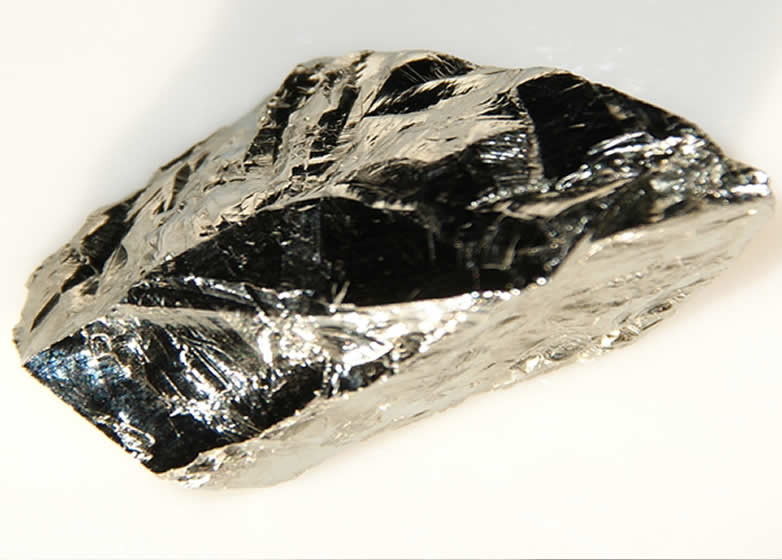 Germanium is a chemical element with the symbol Ge and atomic number 32. It is a lustrous, hard-brittle, grayish-white metalloid in the carbon group, chemically similar to its group neighbors silicon and tin. Pure germanium is a semiconductor with an appearance similar to elemental silicon. Like silicon, germanium naturally reacts and forms complexes with oxygen in nature.

Because it seldom appears in high concentration, germanium was discovered comparatively late in the history of chemistry. Germanium ranks near fiftieth in relative abundance of the elements in the Earth’s crust. In 1869, Dmitri Mendeleev predicted its existence and some of its properties from its position on his periodic table, and called the element ekasilicon. Nearly two decades later, in 1886, Clemens Winkler found the new element along with silver and sulfur, in an uncommon mineral called argyrodite. Although the new element somewhat resembled arsenic and antimony in appearance, the combining ratios in compounds agreed with Mendeleev’s predictions for a relative of silicon. Winkler named the element after his country, Germany. Today, germanium is mined primarily from sphalerite (the primary ore of zinc), though germanium is also recovered commercially from silver, lead, and copper ores.

Elemental germanium is used as a semiconductor in transistors and various other electronic devices. Historically, the first decade of semiconductor electronics was based entirely on germanium. Presently, the major end uses are fibre-optic systems, infrared optics, solar cell applications, and light-emitting diodes (LEDs). Germanium compounds are also used for polymerization catalysts and have most recently found use in the production of nanowires. This element forms a large number of organogermanium compounds, such as tetraethylgermanium, useful in organometallic chemistry. Germanium is considered a technology-critical element.

Germanium is not thought to be an essential element for any living organism. Some complex organic germanium compounds are being investigated as possible pharmaceuticals, though none have yet proven successful. Similar to silicon and aluminium, naturally-occurring germanium compounds tend to be insoluble in water and thus have little oral toxicity. However, synthetic soluble germanium salts are nephrotoxic, and synthetic chemically reactive germanium compounds with halogens and hydrogen are irritants and toxins.

Silicon-germanium alloys are rapidly becoming an important semiconductor material for high-speed integrated circuits. Circuits utilizing the properties of Si-SiGe junctions can be much faster than those using silicon alone. Silicon-germanium is beginning to replace gallium arsenide (GaAs) in wireless communications devices. The SiGe chips, with high-speed properties, can be made with low-cost, well-established production techniques of the silicon chip industry.

Solar panels are a major use of germanium. Germanium is the substrate of the wafers for high-efficiency multijunction photovoltaic cells for space applications. High-brightness LEDs, used for automobile headlights and to backlight LCD screens, are an important application.

Germanium-on-insulator (GeOI) substrates are seen as a potential replacement for silicon on miniaturized chips. CMOS circuit based on GeOI substrates has been reported recently. Other uses in electronics include phosphors in fluorescent lamps and solid-state light-emitting diodes (LEDs). Germanium transistors are still used in some effects pedals by musicians who wish to reproduce the distinctive tonal character of the “fuzz”-tone from the early rock and roll era, most notably the Dallas Arbiter Fuzz Face. 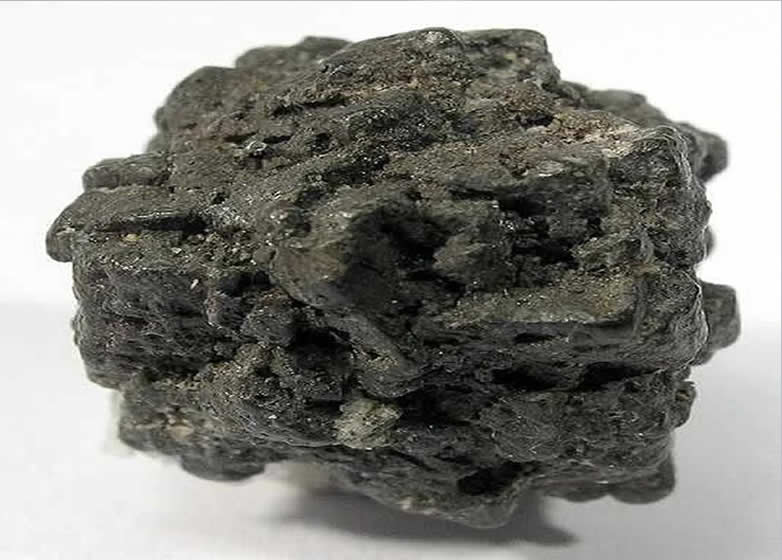 Arsenic is a chemical element with the symbol As and atomic number 33. Arsenic occurs in many minerals, usually in combination with sulfur and metals, but also as a pure elemental crystal. Arsenic is a metalloid. It has various allotropes, but only the gray form, which has a metallic appearance, is important to the industry.

The primary use of arsenic is in alloys of lead (for example, in car batteries and ammunition). Arsenic is a common n-type dopant in semiconductor electronic devices. It is also a component of the III-V compound semiconductor gallium arsenide. Arsenic and its compounds, especially trioxide, are used in the production of pesticides, treated wood products, herbicides, and insecticides. These applications are declining with the increasing recognition of the toxicity of arsenic and its compounds.

A few species of bacteria are able to use arsenic compounds as respiratory metabolites. Trace quantities of arsenic are an essential dietary element in rats, hamsters, goats, chickens, and presumably other species. A role in human metabolism is not known. However, arsenic poisoning occurs in multicellular life if quantities are larger than needed. Arsenic contamination of groundwater is a problem that affects millions of people across the world.

The United States Environmental Protection Agency states that all forms of arsenic are a serious risk to human health. The United States Agency for Toxic Substances and Disease Registry ranked arsenic as number 1 in its 2001 Priority List of Hazardous Substances at Superfund sites. Arsenic is classified as a Group-A carcinogen.

Arsenic was also used in various agricultural insecticides and poisons. For example, lead hydrogen arsenate was a common insecticide on fruit trees, but contact with the compound sometimes resulted in brain damage among those working the sprayers. In the second half of the 20th century, monosodium methyl arsenate (MSMA) and disodium methyl arsenate (DSMA) – less toxic organic forms of arsenic – replaced lead arsenate in agriculture. These organic arsenicals were in turn phased out by 2013 in all agricultural activities except cotton farming.

The biogeochemistry of arsenic is complex and includes various adsorption and desorption processes. The toxicity of arsenic is connected to its solubility and is affected by pH. Arsenite (AsO3−3) is more soluble than arsenate (AsO3−
4) and is more toxic; however, at a lower pH, arsenate becomes more mobile and toxic. It was found that addition of sulfur, phosphorus, and iron oxides to high-arsenite soils greatly reduces arsenic phytotoxicity.

Arsenic is used as a feed additive in poultry and swine production, in particular in the U.S. to increase weight gain, improve feed efficiency, and prevent disease. An example is roxarsone, which had been used as a broiler starter by about 70% of U.S. broiler growers. Alpharma, a subsidiary of Pfizer Inc., which produces roxarsone, voluntarily suspended sales of the drug in response to studies showing elevated levels of inorganic arsenic, a carcinogen, in treated chickens. A successor to Alpharma, Zoetis, continues to sell nitarsone, primarily for use in turkeys.

Arsenic is intentionally added to the feed of chickens raised for human consumption. Organic arsenic compounds are less toxic than pure arsenic and promote the growth of chickens. Under some conditions, the arsenic in chicken feed is converted to the toxic inorganic form.

A 2006 study of the remains of the Australian racehorse, Phar Lap, determined that the 1932 death of the famous champion was caused by a massive overdose of arsenic. Sydney veterinarian Percy Sykes stated, “In those days, arsenic was quite a common tonic, usually given in the form of a solution (Fowler’s Solution) … It was so common that I’d reckon 90% of the horses had arsenic in their system.”