You are here: Home / Hazards of oxygen enriched atmospheres

The hazards of oxygen enriched atmospheres

“Over the decades EIGA has received reports of serious injuries and fatalities due to oxygen enrichment. Fires in oxygen enriched atmosphere start easily and are very intense, so the people injured suffer very serious burns, which are often fatal or cause very severe and prolonged suffering. This newsletter is intended to remind everyone of the hazards of oxygen enrichment and the precautions necessary to avoid accidents. 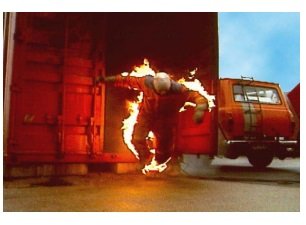 The hazards of oxygen enriched atmospheres

Properties of Oxygen
Gaseous oxygen is colourless and odourless. Liquid oxygen has a clear, pale-blue colour. Oxygen does not burn, but readily supports combustion of other substances. It is capable of reacting with most metals and organic materials. The rate of reaction varies with the material and other conditions. The reaction may be slow (as in the rusting of steel) or rapid (as in combustion and explosion). Since most materials can react with oxygen, materials used in contact with oxygen are carefully selected to be the least reactive under the conditions of service.

Safe Oxygen Concentrations
Air contains 21% oxygen, but if the amount of oxygen is increased, there is an increased risk of fire. Therefore, personnel must not be exposed to atmospheres that contain oxygen concentrations more than approximately 2% higher than air. Clothing, and even body hair and oils, are subject to flash fires if ignited in an oxygen-rich atmosphere. Therefore, matches and lighters must never be carried on the person where there is a risk of oxygen enrichment. Compared with a fire in air, a fire in an enriched oxygen atmosphere is:

♦ more intense
♦ with higher temperatures, and
♦ has a greater heat output rate.

Under most circumstances, an oxygen fire cannot be extinguished until any source of oxygen feeding the fire has been isolated.

What is Oxygen Enrichment?
Oxygen enrichment is a generic name for the hazards associated with gases and liquids containing oxygen concentrations greater than 21%.

Causes of Oxygen Enrichment
Oxygen enrichment of the atmosphere can be the result of:

♦ Leaking pipe connections, flanges etc .This can be particularly hazardous in areas where there is not sufficient ventilation causing the oxygen concentration to increase.
♦ Breaking into systems under oxygen pressure. A sudden release of oxygen under pressure can result in a relatively large jet of escaping oxygen.
♦ Oxygen use in cutting and welding processes. In processes such as cutting, gouging, scarfing and thermic lancing, oxygen is used, in large quantities with poor efficiency in the process. The unused oxygen remains in the atmosphere and, if ventilation is inadequate, the air can become enriched with oxygen.
♦ Desorption. Oxygen can be released in appreciable quantities when cold materials which have absorbed oxygen, such as absorbents (molecular sieve, silica gel etc) or insulation materials are warmed to room temperature.
♦ Liquid oxygen spill. A spill of liquid oxygen creates a dense cloud of oxygen enriched air when evaporating. In an open space, hazardous oxygen concentration usually exists only within the visible cloud associated with the spill. Nevertheless, atmospheric checks should be carried out to confirm this when approaching the vicinity of the vapour cloud.
♦ Liquefaction of air. When using cryogenic gases with boiling points lower than oxygen, e.g. nitrogen, hydrogen and helium, oxygen enrichment can also occur. Ambient air will condense on uninsulated equipment where the temperature is lower than the liquefaction
temperature of air (approx. -193°C). This will also occur on pipework lagged with an open cell insulant. The liquid air so produced at atmospheric pressure can contain up to 50% oxygen and, if this liquid drips off and evaporates, the oxygen concentration in the last remaining portion can be over 80%.
♦ Oxygen vents. Particularly hazardous are areas where oxygen vents are located. A sudden release of oxygen can occur without warning. Note that the non-cryogenic production of oxygen or nitrogen might involve occasional or continuous venting of oxygen.
♦ Venting from Cryogenic Receptacles (Liquid Cylinders). The pressure rises gradually in these receptacles due to heat in-leak causing evaporation of the liquid oxygen. It is a normal occurrence, if oxygen is not used for some time, for the pressure relief valve to release oxygen into the surrounding atmosphere. Oxygen enrichment will occur unless either good ventilation is ensured or the outlet from the pressure relief device is vented to a safe area.
♦ Liquid disposal. Large volumes of gas can result from relatively small liquid leaks in such operations as incorrectly operated liquid disposal systems, LOX pump priming, manual drains and tanker hose disconnection.
♦ Seal gas. Hazardous conditions can be created by the backflow of seal gas, from oxygen rich sections of an ASU, into oil systems. This is a particular problem when plants are shut down.

Entry into Confined Spaces
Prior to entry into any vessel which is connected to a gas source other than air, the vessel shall be emptied, disconnected from such a source by the removal of a section of pipe, by the use of a spectacle plate or by inserting blind flanges and the space shall be thoroughly
ventilated so as to maintain a normal atmosphere. Piping lock-out devices need to be documented in the Work Permit. Reliance on the closure of valves to prevent oxygen enrichment is not sufficient. Permission to enter such a space subsequent to completing the steps indicated above shall be given only after the issue of an entry permit certificate signed by a responsible person. An analysis of the vessel atmosphere shall always be requested as part of the work permit requirements.

Many so-called ‘non-flammable’ textile materials will burn fiercely in oxygen enriched air. Using clothing treated with a flame retardant can be useful only when the enriched oxygen concentration stays very low: but their properties greatly reduce when the oxygen concentration increases. At some point, they do not protect at all (e.g. approximately 25% oxygen concentration or above). Furthermore, repeated washing can reduce the effectiveness of the treatment.

Some synthetic materials can be fire-resistant to some extent, but can still melt and cause serious burns due to the adhesion of molten material to the skin. Synthetic materials are therefore not recommended for underclothing.

Sources of Ignition
Potential sources of ignition are:
♦ Naked or open flames such as lighted cigarettes/ matches/gas cutting torches.
♦ Friction in mechanical systems.
♦ Impact (as in a closing valve).
♦ Hot or incandescent particles generated by grinding
♦ An electrical spark or fault causing overheating.
♦ Static discharge.
♦ An extinguished cigarette.
♦ Electrical tools.

First Aid
People catching fire in an enriched oxygen atmosphere cannot be rescued by a person entering the area to pull them out, as the rescuer will almost certainly also catch fire. The victim shall be deluged with water from a shower, hose or series of fire buckets and go into fresh
air as soon as possible. Immediate medical treatment is required, preferably at a specialist burns treatment unit.

Summary of Recommendations
The more important points which have to receive attention in order to avoid accidents are summarised below:
♦ Ensure that people, who are expected to work with oxygen, are properly trained and informed of the risks caused by an excess of oxygen.
♦ Make sure that the proper equipment is used and that it is leak-tight and in good operational order.
♦ Use only materials and equipment approved for use in oxygen. Never use replacement parts which have not been specifically approved.
♦ Use suitable clean clothing, free from oil and easily combustible contaminants.
♦ Never use oil or grease to lubricate oxygen equipment.
♦ Check that all existing fire extinguishing equipment is in good condition and ready to be used.
♦ When working in confined spaces where oxygen is normally used, isolate the equipment, provide good ventilation and use an oxygen analyser. Entry shall only be allowed by means of a permit issued by a trained responsible person.
♦ Smoking shall be strictly forbidden where there is any possible risk of oxygen enrichment.
♦ People catching fire in enriched oxygen atmospheres cannot be rescued by a person entering the area to pull them out, as the rescuer will almost certainly also catch fire.
♦ People who have been exposed to oxygen enriched atmospheres shall not be allowed to approach open flames, burning cigarettes, etc., until after adequate ventilation of their clothing.
♦ Make sure that all oxygen apparatus and equipment are properly identified. Escape routes must be kept clear at all times.

EIGA campaign highlighting the hazards of oxygen enriched atmospheres
♦ Because oxygen enrichment is a widespread and recurring problem for the industry and its customers, the Safety Advisory Group of EIGA has decided to launch a campaign to raise the awareness of all those at risk. The classical approach of publishing best practice advice has not been sufficient to get the message home to the many people who need to know. SAG believes there is a need to generate a much better knowledge and understanding of the issues and preventative measures.
♦ The EIGA campaign is Europe-wide, targeted at the following users of oxygen:
– The chemical industry;
– Builders of chemical and other major plant;
– The industrial gas industry and its contractors;
– Water and other utility companies;
– The fabrication industry;
– Laboratories using liquid oxygen.
♦ The campaign will be organised by EIGA and run through each national association affiliated to EIGA. Industrial gases companies will take the lead where no national association exists.
♦ National associations may decide to reach the target audience by using their member companies’ channels of communication.
♦ SAG has produced a leaflet and PowerPoint presentation which will be the principal tools used for the campaign.
♦ This leaflet will give the basic message and publicise the availability of the slide show and other publications from EIGA’s website and any national publications and legislation.
♦ EIGA will prepare a press release and send it to European organisations and magazines with a Europe-wide circulation.
♦ The national associations will prepare similar press releases based on the EIGA model and circulate them to national organisations and magazines.

The campaign is planned for January 2005 will be launched at the EIGA ´Winter Technical Meeting 2005.”