Actinium is a chemical element with the symbol Ac and atomic number 89. A ton of pitchblende ore contains about 0.15 mg of actinium. It was first isolated by Friedrich Oskar Giesel in 1902, who gave it the name emanium; the element got its name by being wrongly identified with a substance André-Louis Debierne found and called actinium.

It is a soft, silvery-white radioactive metal. It glows blue in the dark because its intense radioactivity excites the air around it. Actinium is a very powerful source of alpha rays, but is rarely used outside research.

It is about 150 times as radioactive as radium, making it valuable as a neutron source. Otherwise it has no significant industrial applications. Actinium-225 is used in medicine to produce Bi-213 in a reusable generator or can be used alone as an agent for radio-immunotherapy. 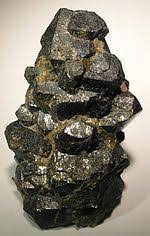 Actinium has 36 isotopes, none of which are stable. Actinium occurs as isotope 227Ac in uranium decay. It has several decay products, including isotope 227Ac, a beta emitter that is a decay product of 2235U with a 21.6-year half-life.

Actinium is found naturally in uranium ores. It rarely occurs as a free element in the earth’s crust. It is more frequently produced in the lab, largely for use as a radiation source.

Actinium is a very powerful source of alpha rays, but is rarely used outside research. It has no known biological role. It is toxic due to its radioactivity. Actinium used for research purposes is made by the neutron bombardment of radium-226.

Actinium itself glows in the dark and reacts with water to produce hydrogen gas. It also reacts with air and acids, but not bases. It is used in thermoelectric power sources and also used in neutron emitters.