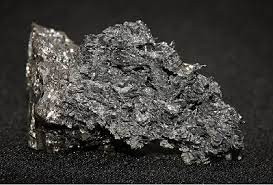 Beryllium is a silvery-white metal. It is relatively soft and has a low density.
Named after beryllos, the Greek name for the mineral beryl, the element was originally known as glucinium — from Greek glykys, meaning “sweet” — to reflect its characteristic taste. But the chemists who discovered this unique property of beryllium also found that it is in fact highly toxic and should therefore never be tasted,
It is used in alloys with copper or nickel to make gyroscopes, springs, electrical contacts, spot-welding electrodes and non-sparking tools. Mixing beryllium with these metals increases their electrical and thermal conductivity.

Atomic number (number of protons in the nucleus): 4
Atomic symbol (on the Periodic Table of the Elements): Be
Atomic weight (average mass of the atom): 9.012182
Density: 1.85 grams per cubic centimeter
Phase at room temperature: Solid
Melting point: 2,348.6 degrees Fahrenheit (1,287 degrees Celsius)
Boiling point: 4,479.8 F (2,471 C)
Number of isotopes (atoms of the same element with a different number of neutrons): 12, including one stable isotope.
Most common isotopes: 9Be (Natural abundance: 100 percent)

Beryllium is used in gears and cogs particularly in the aviation industry.  Other beryllium alloys are used as structural materials for high-speed aircraft, missiles, spacecraft and communication satellites. It is relatively transparent to X-rays so ultra-thin beryllium foil is finding use in X-ray lithography. It is also used in nuclear reactors as a reflector or moderator of neutrons.

The oxide has a very high melting point making it useful in nuclear work as well as having ceramic applications.

Beryllium and its compounds are toxic and carcinogenic. If beryllium dust or fumes are inhaled, it can lead to an incurable inflammation of the lungs called berylliosis.