Boron is a chemical (non-metalic) element with the symbol B and atomic number 5. Produced entirely by cosmic ray spallation and supernovae and not by stellar nucleosynthesis, it is a low-abundance element in the Solar System and in the Earth’s crust. It constitutes about 0.001 percent by weight of Earth’s crust.  Boron is electron-deficient, possessing a vacant p-orbital. It has several forms, the most common of which is amorphous boron, a dark powder, unreactive to oxygen, water, acids and alkalis. It reacts with metals to form borides. At standard temperatures boron is a poor electrical conductor but is a good conductor at high temperatures.

Boron is a mineral that is found in food such as nuts and the environment. People take boron supplements as medicine. It is used for building strong bones, treating osteoarthritis, as an aid for building muscles and increasing testosterone levels, and for improving thinking skills and muscle coordination.

Boron was used as a food preservative between 1870 and 1920, and during World Wars I and II. 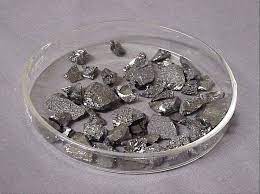 The most economically important compound of boron is sodium tetraborate decahydrate Na2B4O7 · 10H2O, or borax, used for insulating fiberglass and sodium perborate bleach. Boric acid is an important compound used in textile products.  Compounds of boron are used in organic synthesis, in the manufacture of a particular type of glasses, and as wood preservatives. Boron filaments are used for advanced aerospace structures, due to their high-strength and light weight.

An early use of borax was to make perborate, the beaching agent once widely used in household detergents.

Boron compound also came into the average home in the guise of food preservatives, especially for margarine and fish.

Boron is not present in nature in elemental form. It is found combined in borax, boric acid, kernite, ulexite, colemanite and borates. Vulcanic spring waters sometime contains boric acids.
Borates are mined in US, Tibet, Chile and Turkey, with world production being about 2 million tonnes per year.

Why Oxygen Supply is Needed in Remote Areas