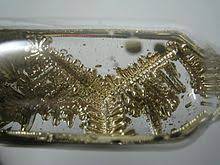 Caesium is a chemical element with the symbol Cs and atomic number 55. It is a soft, silvery-golden alkali metal with a melting point of 28.5 °C (83.3 °F), which makes it one of only five elemental metals that are liquid at or near room temperature.  It has physical and chemical properties similar to those of rubidium and potassium. The most reactive of all metals, it is pyrophoric and reacts with water even at −116 °C (−177 °F). It is the least electronegative element, with a value of 0.79 on the Pauling scale. It has only one stable isotope, caesium-133. Caesium is mined mostly from pollucite, while the radioisotopes, especially caesium-137, a fission product, are extracted from waste produced by nuclear reactors.

The metal is characterised by a spectrum containing two bright lines in the blue (accounting for its name). It is silvery gold, soft, and ductile. It is the most electropositive and most alkaline element. Cesium, gallium, and mercury are the only three metals that are liquid at or around room temperature. Cesium reacts explosively with cold water, and reacts with ice at temperatures above -116°C. Cesium hydroxide is a strong base and attacks glass. Cesium reacts with the halogens to form a fluoride, chloride, bromide, and iodide. Cesium metal oxidized rapidly when exposed to the air and can form the dangerous superoxide on its surface.

It is used in industry as a catalyst promoter, boosting the performance of other metal oxides in the capacity and for the hydrogenation of organic compounds. Cesium nitrate is used to make optical glasses. It is sometimes used to remove traces of oxygen from the vacuum tubes and from light bulbs. Cesium salts are used to strenght various types of glass. The chloride is used in photoelectric cells, in optical instruments, and in increasing the sensitivity of electron tubes. Cesium is used in atomic clocks and more recently in ion propulsion systems.

Humans may be exposed to cesium by breathing, drinking or eating. In air the levels of cesium are generally low, but radioactive cesium has been detected at some level in surface water and in many types of foods.

The amount of cesium in foods and drinks depends upon the emission of radioactive cesium through nuclear power plants, mainly through accidents. These accidents have not occurred since the Chernobyl disaster in 1986. People that work in the nuclear power industry may be exposed to higher levels of cesium, but many precautionary measurements can be taken to prevent this.

Caesium was almost discovered by Carl Plattner in 1846 when he investigated the mineral pollucite (caesium aluminium silicate). He could only account for 93% of the elements it contained, but then ran out of material to analyse. (It was later realised that he mistook the caesium for sodium and potassium.)

The most common use for caesium compounds is as a drilling fluid. They are also used to make special optical glass, as a catalyst promoter, in vacuum tubes and in radiation monitoring equipment.

One of its most important uses is in the ‘caesium clock’ (atomic clock). These clocks are a vital part of the internetand mobile phone networks, as well as Global Positioning System (GPS) satellites. They give the standard measure of time: the electron resonance frequency of the caesium atom is 9,192,631,770 cycles per second. Some caesium clocks are accurate to 1 second in 15 million years.