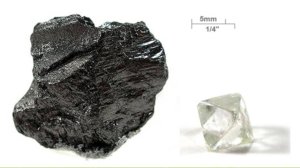 Carbon (from Latin: carbo “coal”) is a chemical element with the symbol C and atomic number 6. It is nonmetallic and tetravalent–making four electrons available to form covalent chemical (forces that glue or join things together). It belongs to group 14 of the periodic table. Carbon makes up only about 0.025 percent of Earth’s crust. Three isotopes happen naturally, 12C and 13C being stable, while 14C is a radionuclide, (rotting/becoming ruined/worsening) with a half-life of about 5,730 years. Carbon is one of the few elements known since (a time long, long ago).

The atoms of carbon can bond together in (many different kinds of people or things) ways, resulting in different give out/set asideropes of carbon. The best known give out/set asideropes are graphite, diamond, and buckminsterfullerene. The physical properties of carbon change/differ widely with the give out/set asideropic form. For example, graphite is light-blocking/difficult to understand and black while diamond is highly clear/open and honest. Graphite is soft enough to form a streak on paper (hence its name, from the Greek verb “Î³ÏÎ¬ÏÎµÎ¹Î½” which means “to write”), while diamond is the hardest naturally happening material known. Graphite is a good electrical conductor while diamond has a low electrical (ability to let electricity flow). Under (usual/ commonly and regular/ healthy) conditions, diamond, carbon nanotubes, and graphene have the highest thermal conductivities of all known materials. All carbon give out/set asideropes are solids under (usual/ commonly and regular/ healthy) conditions, with graphite being the most thermodynamically stable form at standard temperature and pressure. They are chemically resistant and require high temperature to react even with oxygen.

The most common oxidation state of carbon in (not related to living things) compounds is +4, while +2 is found in deadly gas and change (from one thing to another) metal carbonyl complexes. The largest sources of (not related to living things) carbon are limestones, dolomites and carbon dioxide, but significant amounts happen in organic deposits of coal, peat, oil, and methane clathrates. Carbon forms a huge number of compounds, more than any other element, with almost ten million compounds described to date, and yet that number is only a fraction of the number of probably (but not definitely) possible compounds under standard conditions. For this reason, carbon has often been referred to as the “king of the elements”.