Cobalt is a chemical element with the symbol Co and atomic number 27. Like nickel, cobalt is found in the Earth’s crust only in a chemically combined form, save for small deposits found in alloys of natural meteoric iron. The free element, produced by reductive smelting, is a hard, lustrous, silver-gray metal.

Cobalt is primarily used in lithium-ion batteries, and in the manufacture of magnetic, wear-resistant and high-strength alloys. The compounds cobalt silicate and cobalt(II) aluminate (CoAl2O4, cobalt blue) give a distinctive deep blue color to glass, ceramics, inks, paints and varnishes. People have been using cobalt-containing pigments to get that rich blue hue as far back as the 3rd millennium BCE, when Persians used them to color their necklace beads. The famed “cobalt blue” is actually the result of the compound cobalt aluminate. 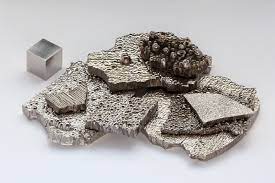 Cobalt hides out in everyday objects and happenings around us, from batteries and blue paint to medical procedures. We’ve used it for millennia, but it didn’t get proper credit until the 18th century. With its 27 protons, cobalt is sandwiched between iron and nickel in the middle portion of the periodic table with the other “transition” metals, which bridge the main group elements located on either side. Here are ten curious facts about this element.

Though you can find cobalt just about everywhere—in the soil, in mineral deposits, and even in crusts on the seafloor—it’s always combined with other elements like nickel, copper, iron, or arsenic, such as in the bright crimson arsenate mineral erythrite.

Despite being relatively common, it’s considered a critical raw material by the European Union because there are few places where it’s abundant enough to be mined in larger quantities. Most of the Earth’s cobalt is in its core. Cobalt is of relatively low abundance in the Earth’s crust and in natural waters, from which it is precipitated as the highly insoluble cobalt sulfine CoS.

Cobalt is one of the few elements that are ferromagnetic, which means it can become magnetized when exposed to an external magnetic field. It remains magnetic at extremely high temperatures, making it very useful for the specialized magnets in generators and hard drives.

Cobalt is beneficial for humans because it is a part of vitamin B12, which is essential for human health.