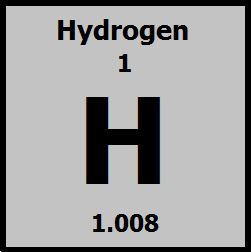 Hydrogen (H) is a colourless, odourless, tasteless, flammable gaseous substance that is the simplest member of the family of chemical elements. The H atom has a nucleus consisting of a proton bearing one unit of positive electrical charge; an electron, bearing one unit of negative electrical charge, is also associated with this nucleus. Under ordinary conditions, H gas is a loose aggregation of hydrogen molecules, each consisting of a pair of atoms, a diatomic molecule, H2. The earliest known important chemical property of hydrogen is that it burns with oxygen to form water, H2O; indeed, the name hydrogen is derived from Greek words meaning “maker of water.”

Hydrogen is the chemical element with the symbol H and atomic number 1. With a standard atomic weight of 1.008, it is the lightest element in the periodic table. It is the most abundant chemical substance in the universe, constituting roughly 75% of all baryonic mass.

Hydrogen can be used in fuel cells to generate electricity, or power and heat. Today, it is most commonly used in petroleum refining and fertilizer production, while transportation and utilities are emerging markets. It is a clean alternative to methane, also known as natural gas. It’s the most abundant chemical element, estimated to contribute 75% of the mass of the universe.

What is the difference between blue and green hydrogen? Blue hydrogen is produced from non-renewable energy sources, by using one of two primary methods. Steam methane reformation is the most common method for producing bulk hydrogen and accounts for most of the world’s production. This method uses a reformer, which reacts steam at a high temperature and pressure with methane and a nickel catalyst to form hydrogen and carbon monoxide.