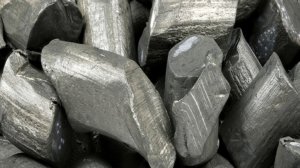 Indium is a chemical element with the symbol In and atomic number 49. Indium is the softest metal that is not an alkali metal. It is a silvery-white metal that resembles tin in appearance. It is a post-transition metal that makes up 0.21 parts per million of the Earth’s crust. Indium has a melting point higher than sodium and gallium, but lower than lithium and tin. Chemically, indium is similar to gallium and thallium, and it is largely intermediate between the two in terms of its properties. Indium was discovered in 1863 by Ferdinand Reich and Hieronymous Theodor Richter by spectroscopic methods. They named it for the indigo blue line in its spectrum. Indium was isolated the next year.

Indium is a minor component in zinc sulfide ores and is produced as a byproduct of zinc refinement. It is most notably used in the semiconductor industry, in low-melting-point metal alloys such as solders, in soft-metal high-vacuum seals, and in the production of transparent conductive coatings of indium tin oxide (ITO) on glass. Indium is considered a technology-critical element.

Indium is a silvery-white, highly ductile post-transition metal with a bright luster. It is so soft (Mohs hardness 1.2) that like sodium, it can be cut with a knife. It also leaves a visible line on paper. It is a member of group 13 on the periodic table and its properties are mostly intermediate between its vertical neighbours gallium and thallium. Like tin, a high-pitched cry is heard when indium is bent – a crackling sound due to crystal twinning.  Like gallium, indium is able to wet glass. Like both, indium has a low melting point, 156.60 °C (313.88 °F); higher than its lighter homologue, gallium, but lower than its heavier homologue, thallium, and lower than tin.  The boiling point is 2072 °C (3762 °F), higher than that of thallium, but lower than gallium, conversely to the general trend of melting points, but similarly to the trends down the other post-transition metal groups because of the weakness of the metallic bonding with few electrons delocalized.

Why Oxygen Supply is Needed in Remote Areas
Scroll to top Need help?