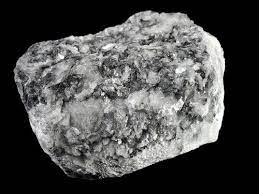 Magnesium is a chemical element with the symbol Mg and atomic number 12. It is a shiny gray solid which bears a close physical resemblance to the other five elements in the second column of the periodic table: all group 2 elements have the same electron configuration in the outer electron shell and a similar crystal structure.

This element is produced in large, aging stars from the sequential addition of three helium nuclei to a carbon nucleus. When such stars explode as supernovas, much of the magnesium is expelled into the interstellar medium where it may recycle into new star systems. It is the eighth most abundant element in the Earth’s crust and the fourth most common element in the Earth (after iron, oxygen and silicon), making up 13% of the planet’s mass and a large fraction of the planet’s mantle. It is the third most abundant element dissolved in seawater, after sodium and chlorine.

Magnesium is a nutrient that the body needs to stay healthy. It is important for many processes in the body, including regulating muscle and nerve function, blood sugar levels, and blood pressure and making protein, bone, and DNA.

Historically, magnesium was one of the main aerospace construction metals and was used for German military aircraft as early as World War I and extensively for German aircraft in World War II. The Germans coined the name “Elektron” for magnesium alloy, a term which is still used today. In the commercial aerospace industry, magnesium was generally restricted to engine-related components, due to fire and corrosion hazards. Magnesium alloy use in aerospace is increasing in the 21st century, driven by the importance of fuel economy.

In the form of thin ribbons, magnesium is used to purify solvents; for example, preparing super-dry ethanol.