Palladium is a chemical element with the symbol Pd and atomic number 46. It is a rare and lustrous silvery-white metal discovered in 1803 by the English chemist William Hyde Wollaston and named after an asteroid.  Before the precious metal palladium was discovered, the word “palladium” referred to objects believed to mystically provide protection and safety ( a talisman ). The origin of the definition comes from Homer’s Iliad. 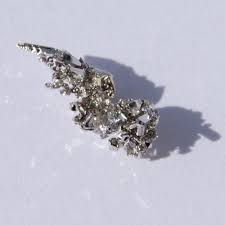 Palladium is one of six metals belonging to the platinum family. The others are platinum, rhodium, ruthenium, osmium, and iridium. All these precious metals are known for their catalytic abilities when it comes to speeding up chemical reactions.

Palladium is now the most valuable of the four major precious metals, with an acute shortage driving prices to a record. A key component in pollution-control devices for cars and trucks, the metal’s price doubled in little more than a year, making it more expensive than gold.

A extremely malleable and tarnish-resistant metal, palladium has become a popular metal for jewelry making and catalytic converters because it does not react with oxygen. In jewelry, palladium is known for its durability, low-maintenance, and similar appearance to platinum at a much lower cost.

Russia and South Africa supply about 40% of the world’s palladium, making them the highest producers each year.

In 2010, Richard F. Heck, Ei-ichi Negishi, and Akira Suzuki were awarded the Nobel Prize in Chemistry for their work in palladium-catalyzed coupling reactions and organic synthesis – which are widely used for the synthesis of fine chemicals and pharmaceuticals.