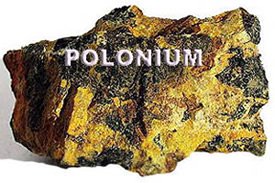 Polonium is a chemical element with the symbol Po and atomic number 84. Polonium is a chalcogen. A rare and highly radioactive metal with no stable isotopes, polonium is chemically similar to selenium and tellurium, though its metallic character resembles that of its horizontal neighbors in the periodic table: thallium, lead, and bismuth. Due to the short half-life of all its isotopes, its natural occurrence is limited to tiny traces of the fleeting polonium-210 (with a half-life of 138 days) in uranium ores, as it is the penultimate daughter of natural uranium-238. Though slightly longer-lived isotopes exist, they are much more difficult to produce. Today, polonium is usually produced in milligram quantities by the neutron irradiation of bismuth. Due to its intense radioactivity, which results in the radiolysis of chemical bonds and radioactive self-heating, its chemistry has mostly been investigated on the trace scale only.

Polonium was discovered in July 1898 by Marie and Pierre Curie, when it was extracted from the uranium ore pitchblende and identified solely by its strong radioactivity: it was the first element to be so discovered. Polonium was named after Marie Curie’s homeland of Poland. Polonium has few applications, and those are related to its radioactivity: heaters in space probes, antistatic devices, sources of neutrons and alpha particles, and poison. It is extremely dangerous to humans.

210Po is an alpha emitter that has a half-life of 138.4 days; it decays directly to its stable daughter isotope, 206Pb. A milligram (5 curies) of 210Po emits about as many alpha particles per second as 5 grams of 226Ra. A few curies (1 curie equals 37 gigabecquerels, 1 Ci = 37 GBq) of 210Po emit a blue glow which is caused by ionisation of the surrounding air.

About one in 100,000 alpha emissions causes an excitation in the nucleus which then results in the emission of a gamma ray with a maximum energy of 803 keV.

Polonium is a radioactive element that exists in two metallic allotropes. The alpha form is the only known example of a simple cubic crystal structure in a single atom basis at STP, with an edge length of 335.2 picometers; the beta form is rhombohedral.] The structure of polonium has been characterized by X-ray diffraction and electron diffraction.

210Po (in common with 238Pu[citation needed]) has the ability to become airborne with ease: if a sample is heated in air to 55 °C (131 °F), 50% of it is vaporized in 45 hours to form diatomic Po2 molecules, even though the melting point of polonium is 254 °C (489 °F) and its boiling point is 962 °C (1,764 °F). More than one hypothesis exists for how polonium does this; one suggestion is that small clusters of polonium atoms are spalled off by the alpha decay.

The chemistry of polonium is similar to that of tellurium, although it also shows some similarities to its neighbor bismuth due to its metallic character. Polonium dissolves readily in dilute acids but is only slightly soluble in alkalis. Polonium solutions are first colored in pink by the Po2+ ions, but then rapidly become yellow because alpha radiation from polonium ionizes the solvent and converts Po2+ into Po4+. As polonium also emits alpha-particles after disintegration so this process is accompanied by bubbling and emission of heat and light by glassware due to the absorbed alpha particles; as a result, polonium solutions are volatile and will evaporate within days unless sealed. At pH about 1, polonium ions are readily hydrolyzed and complexed by acids such as oxalic acid, citric acid, and tartaric acid.

Polonium has no common compounds, and almost all of its compounds are synthetically created; more than 50 of those are known. The most stable class of polonium compounds are polonides, which are prepared by direct reaction of two elements. Na2Po has the antifluorite structure, the polonides of Ca, Ba, Hg, Pb and lanthanides form a NaCl lattice, BePo and CdPo have the wurtzite and MgPo the nickel arsenide structure. Most polonides decompose upon heating to about 600 °C, except for HgPo that decomposes at ~300 °C and the lanthanide polonides, which do not decompose but melt at temperatures above 1000 °C. For example, PrPo melts at 1250 °C and TmPo at 2200 °C. PbPo is one of the very few naturally occurring polonium compounds, as polonium alpha decays to form lead.

Halides of the structure PoX2, PoX4 and PoF6 are known. They are soluble in the corresponding hydrogen halides, i.e., PoClX in HCl, PoBrX in HBr and PoI4 in HI. Polonium dihalides are formed by direct reaction of the elements or by reduction of PoCl4 with SO2 and with PoBr4 with H2S at room temperature. Tetrahalides can be obtained by reacting polonium dioxide with HCl, HBr or HI.