Silver is a chemical element with the symbol Ag and atomic number 47. A soft, white, lustrous transition metal, it exhibits the highest electrical conductivity, thermal conductivity, and reflectivity of any metal.

Silver was one of the first five elements discovered, along with gold, copper, lead and iron and has been mined for over 6000 years. Silver objects have been found dating as far back as 4000 BC. 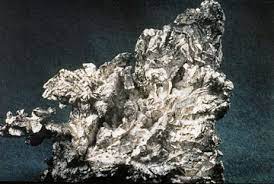 Silver is the most reflective element, reflecting 95% of the visible light spectrum. Unless you use it in ultraviolet light, which makes it about as reflective as a stone. It is most effective immediately after placement.  Silver is stable in oxygen and water, but tarnishes when exposed to ozone, hydrogen sulfide or air containing sulfur due to a reaction with sulfur compounds which cause a black sulfide layer. The crystal structure of silver is cubic.

Silver forms in star explosions called supernovae, as does gold. A study published in September 2012 in the journal Astronomy and Astrophysics found that smaller stars that explode produce silver, while larger stars produce gold.

Silver is rare element relative to other elements. This rarity also makes it the precious metal. It is not a very reactive element, so it found in its pure form and also in some minerals, e.g. argentite. The major silver producing countries are China, Peru, and Mexico.

Silver iodide has been used to make clouds produce rain in an attempt to control hurricanes.