Sulfur is a chemical element with the symbol S and atomic number 16. It is abundant, multivalent and nonmetallic. Under normal conditions, sulfur atoms form cyclic octatomic molecules with a chemical formula S₈. Elemental sulfur is a bright yellow, crystalline solid at room temperature.

Pure sulfur is a tasteless, odourless, brittle solid that is pale yellow in colour, a poor conductor of electricity, and insoluble in water. It reacts with all metals except gold and platinum, forming sulfides; it also forms compounds with several nonmetallic elements. 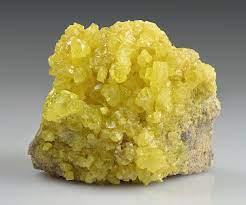 The most common appears as yellow crystals or powder. It is used in the vulcanisation of black rubber, as a fungicide and in black gunpowder. Most sulfur is used in the production of sulfuric acid, which is perhaps the most important chemical manufactured by western civilisations.

The major derivative of sulphur is sulphuric acid (H2SO4), one of the most important elements used as an industrial raw material. Sulphur is also used in batteries, detergents, fungicides, manufacture of fertilizers, gun power, matches and fireworks.

A nonmetal, it is the 10th most abundant element in the universe, according to the Jefferson National Linear Accelerator Laboratory. Today, it’s most common use is in the manufacture of sulfuric

acid, which in turn goes into fertilizers, batteries and cleaners. It’s also used to refine oil and in processing ores.

Sulfur occurs frequently in compounds in nature, usually as a stinky, yellow mineral associated with hot springs and volcanoes.