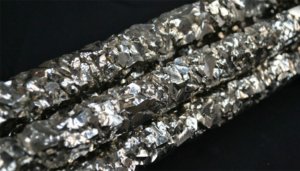 Zirconium is a chemical element with the symbol Zr and atomic number 40. The name zirconium is taken from the name of the mineral zircon (the word is related to Persian zargun (zircon; zar-gun, “gold-like” or “as gold”)), the most important source of zirconium.It is a lustrous, grey-white, strong transition metal that closely resembles hafnium and, to a lesser extent, titanium. Zirconium is mainly used as a refractory and opacifier, although small amounts are used as an alloying agent for its strong resistance to corrosion. Zirconium forms a variety of inorganic and organometallic compounds such as zirconium dioxide and zirconocene dichloride, respectively. Five isotopes occur naturally, three of which are stable. Zirconium compounds have no known biological role.

Zirconium is a lustrous, greyish-white, soft, ductile, malleable metal that is solid at room temperature, though it is hard and brittle at lesser purities. In powder form, zirconium is highly flammable, but the solid form is much less prone to ignition. Zirconium is highly resistant to corrosion by alkalis, acids, salt water and other agents. However, it will dissolve in hydrochloric and sulfuric acid, especially when fluorine is present. Alloys with zinc are magnetic at less than 35 K.